Researchers looked at 251 closed medical malpractice cases in the CRICO Strategies national Comparative Benchmarking System (CBS) where patients alleged that the general medical practitioner who treated them in an outpatient setting missed a cardiovascular diagnosis. These cases were more likely to result in higher severity injury than malpractice claims in general, the study showed. Key findings included:

The article is available as open access through the Joint Commission Journal on Quality and Patient Safety. 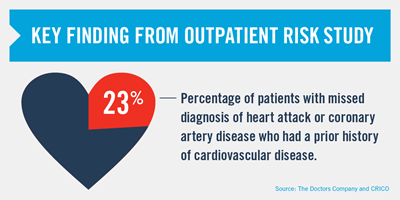 Read the full-text study in the Joint Commission Journal on Quality and Patient Safety:

Our goal is to unite the medical and insurance communities into a single voice with reliable and actionable data as our shared language. Let’s work together to advance your business and protect your stakeholders. Partner with CRICO Strategies and we’ll strengthen your organization’s ability to reduce medical malpractice risks with powerful analytics of more than 400,000 cases of harm and loss and expertise that help get results.